They give a fig in Brisbane 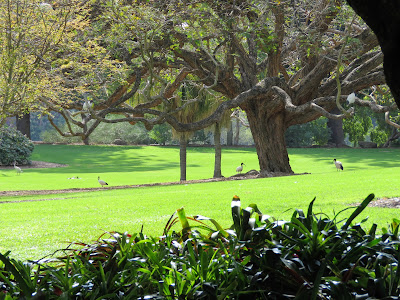 Brisbane's City Botanic Gardens, at the opposite end of Albert Street to the swanky Roma Street Parkland, is the neglected sister (or brother if you like) of Mt Coot-tha Botanic Garden. When that slightly more elevated garden opened 40 years ago it quickly siphoned off what was left of the horticultural and botanical investment in town.

At first glance it reminds me of Sydney's Royal Botanic Gardens, with the high-rising backdrop and limited topography, although at 18 hectares is is half the size of Sydney's, and Melbourne's, city gardens. Like these two southern gardens, it has specimen trees dating back to the mid nineteenth century.

Director of both the City and Mt Cooth-tha Botanic Gardens, Dale Arvidsson, is apologetic about the standard of care (although on the mend), the scope of the plant collection (watch this space) and the state of the majestic old trees (first aid is being applied).

In the Master Plan published in 2015 the City Botanic Gardens will become a welcoming destination at the south-eastern end of a greener Albert Street. The riverside will be swished up, like other parts of the Brisbane River frontage - although perhaps a little softer. The bit that excites me, and I think Dale, is sprucing up the heritage plant collections (mostly trees) and showcasing edibles and medicinals. 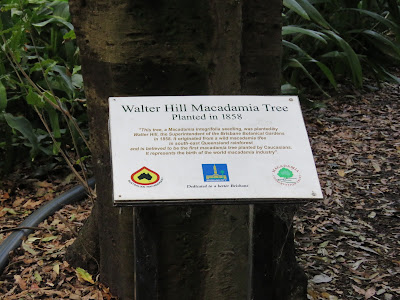 One great example of a great story tree is the one behind this sign, a macadamia. It's the first grown in cultivation and the beginning of the macadamia nut industry (although that story has a little less to do with Queensland and more to do with Hawaii). The sign singles out the European settlers but it's unlikely the species was farmed by the first inhabitants of Australia.

Each of the trees is now being treated like an old friend or family member (which ever makes you think of caring), with its own regime of watering, mulching and pruning. Rather than an urban forest or tree collection, which can be appropriate and admirable, this is a botanic garden populated by elders who need some extra support. 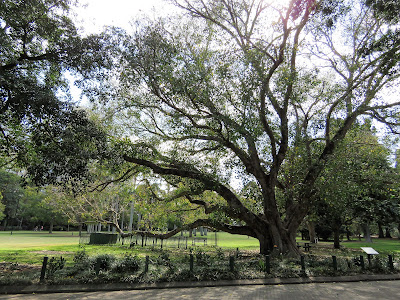 While interpretation isn't strong - that is yet to come - I did like the sign on this Peepul or Bo Tree (Ficus religiosa), planted in the 1870s and having one of its limbs repaired. After the usual yarn about Buddha and his path to enlightenment being shaded at a critical point by this species, there is a lovely paragraph goes like this: The pious Peepul Tree is similar to the expansive Banyan Tree, which is also growing in these gardens. They are both Indian fig trees, and they are both considered sacred, though the Peepul Tree will never equal the Banyan's tremendous dimensions, and the Banyan Tree will never match the Peepul's mystical charm.

So mystical charm it is then, despite the intensive care on its lowermost limb. 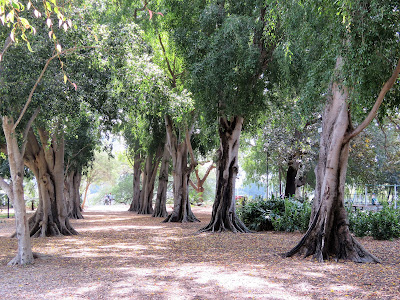 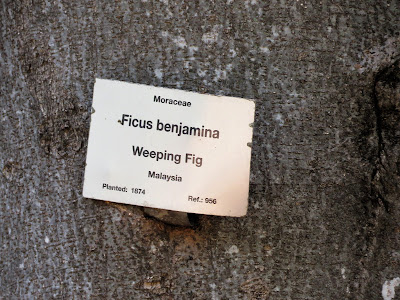 Not far away is an avenue of Weeping Fig (Ficus benjamina), whose buttress roots had been cruelly severed to allow transit through their middle. Not only that, but their label says they hail from Malaysia when now it seems they are a dinky di Queensland native as well. 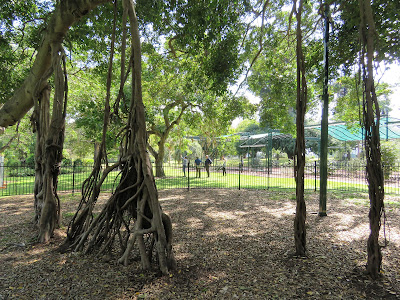 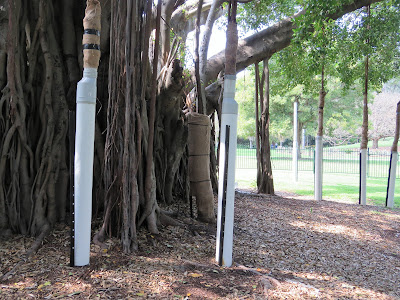 Then there is this fig, whose name escapes me but perhaps it is the one that will always exceed the dimensions of the Peepul Tree, the Banyan Tree (Ficus benghalensis). Here the tree supports its loping limbs with aerial roots that drop down to the ground then solidify like a new trunk. In a public park these dangling roots are tempting to swing on, and in case outside its native forest a dry atmosphere or a thousand other uncertainties can mean the roots never meet the ground.

Solution? Use plastic pipes provide a conduit to the Earth and wrap the tender roots in soil within hessian. In time any metal props and the aerial-root scaffolding will be removed. The fence too may go.

These are just three examples of the attention being applied to trees in the City Botanic Gardens. No matter what is added along the riverside or to the collections, I think it will be the heart-felt care of such leafy elders that will make this particular botanic garden a winner.

Oh, that and the grown-up Pereskia, usually grown in a pot and one of the few cacti with leaves... 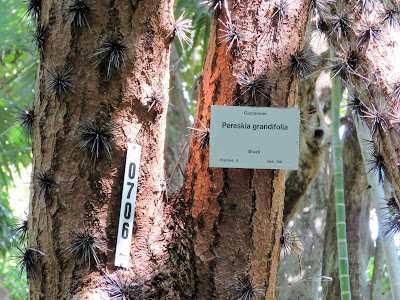 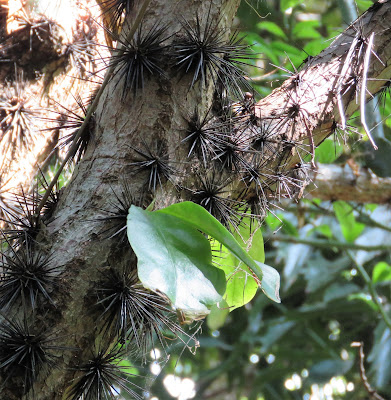 Unknown said…
We're lucky to have Dale Arvidsson curating both Brisbane's Botanic Gardens. He's brought a forward-thinking and pragmatic approach to their public use and enjoyment, and most importantly their conservation.