A taste for local plants* 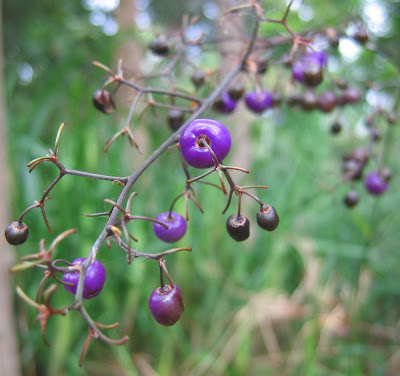 How many plants have you eaten today? For most of us it would be well into the double figures, and on a good day, maybe up to a hundred. This post on the First Farm and bush tucker covers two interviews from my Simon Marnie radio archives - a kind of post-Crave (Sydney Food Festival) contribution...

Even a classic Australian menu of breakfast cereal followed by toast and jam, lunch of pie with sauce, all topped off with meat and three veg for dinner, will include dozens of different plant ingredients. Then you have coffee, tea, chocolate, sugar, and so on.

Although most of the world’s human population gets its nutrition from only 20 or so staple crops, the number of plant species known to be consumed worldwide is something like 15,000.

Most are flowering plants – about 6% of the world’s flora – and we eat their fruits, seeds, leaves, stems, bark, bulbs and roots. If we can bash, boil or bake to remove poisonous compounds, we’ll even do that.

Agriculture in Australia started, and stalled, at the site of the Royal Botanic Gardens on Farm Cove. Although the European settlers and prisoners scoured the countryside for edible native plants, they had to grow crops to support the rising population.

The site of the first farm has been in continuous cultivation since 1788. The cereal crops failed due to rust outbreaks, although cabbages, cauliflowers and melons were a success. The farm soon moved to more fertile ground at Parramatta, to be replaced by a collection of native plants waiting to travel to England or new exotics to introduce into the colony – the forerunner of Sydney’s botanic garden.

Today you can see tobacco and pineapple from the Americas, sugar cane and ginger from Asia, cotton from India, and coffee from Africa. With better soil preparation and horticultural care, these now flourish alongside a display of native plants used by the Cadigal.

Back in the 1780s, Saturday was bush tucker day for Arthur Phillip and his charges. Wild celery, spinach and parsley were all gathered and eaten to combat scurvy.

There must have been a few mistakes made, with the bright orange seeds of the Burrawang (Macrozamia communis) highly toxic unless prepared very carefully.

Although a population of a thousand (and growing) living in this confined area couldn’t be sustained on bush food alone, there were a lot of good food plants overlooked.

The Indigenous plant section of the Cadi Jam Ora: First Encounters garden is a contrast to the First Farm beds. At first glance it seems full of harsh and unpalatable bush plants.

But food there is. The knowledge of the Cadigal people was gathered over tens of thousands of years, and just a small sample of food plants and their stories is on display here.

My favourite is the 2-6 metre high flowering stalk of the Gymea Lily (Doryanthes excelsa) being roasted and eaten as a kind of giant asparagus. Or you can munch of the individual flowers of the native bluebell (Wahlenbergia communis) or the Mountain Devil (Lambertia formosa).

More subtle is the use of the softer bottom part of leaves from Grass Trees or wargalarra (Xanthorrhoea) and Spiny-headed Mat-rush (Lomandra longifolia) – apparently the rush has a pea-like flavour.

The bright blue berries of the Blue Flax Lily (Dianella) look edible, and they are – either fresh from the bush, or these days they look particularly good swirled through ice cream. Also tasty are the fruits of the lilly pillies.

The ripe fruit of the native geebung (Persoonia) is bit more of a challenge. You should hold onto the skin (which apparently has a laxative effect if eaten), eject the seed and pulp into your mouth, then spit out the seed.

Remember, not all plants are edible. Get good advice, make sure you correctly identify the plant, and be careful.

Unknown said…
Nice content for me. i love the blog
safety auditing does more than just ensure compliance with the various acts and regulations governing occupational health and safety (OHS); it ensures that employees are kept healthy, injury-free and productive. For more information on our Safety Auditing Program or any of our other services.
We Provides best Safety Auditing Experts in Australia

Sydney Pest Control said…
pest control sydney are qualified pest controllers in Sydney and can carry out a building inspection for pests. If you have nasty creepy crawlies hiding somewhere, we will find them! You will receive a detailed report on what we find, where we find it, and how best to remedy the situation.
6:51 pm, May 30, 2019

Unknown said…
Contact safe pest control today, Sydney's leading Pest specialists for over a decade. We handle all Residential and Commercial projects with environmentally, eco-friendly and pet friendly control solutions, fully insured and offer a 6 Month guarantee to all our customers.
4:08 am, June 14, 2019