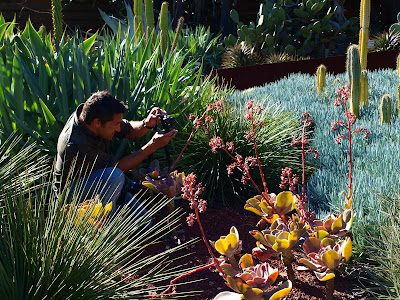 A beautiful sunny morning in the Cacti and Succulent Garden at the Royal Botanic Gardens. Lots of red, orange and yellow Aloes in flower. A couple of giant Agaves giving it their all in a once in (their) lifetime floral display. The giant agave-like Furcraea is nearly spent but you can find a few shattered flowers at its base, the result of cockatoo pruning.
Jaime Durie and crew had flown across to Sydney to do two days filming for their American version of 'The Outdoor Room'. It's a commercial show, but I'm happy to promote products that excite people about plants and gardens. Jamie is also an Ambassador for our Royal Botanic Gardens Foundation, and has given his time freely to help us launch various campaigns.
We talked about his return to the Cacti and Succulent Garden after quite a few years - he now spends about half his time in the US and half in Australia. Of course we also filmed and talked about his recycled steel sculpture in the Garden, and how the plants have settled in nicely after five years. It does look good, and the rusty brown finish is a great backdrop for the grey-green succulents, some with suitably red-brown new growth.
After chatting about changes in the Royal Botanic Gardens over the last five years - new Begonia, Rose and Camellia gardens, plus a reduction in the amount of water we use by about 50% - I left Jamie and entourage to walk across to the Australian Rockery, near the Opera House. This rockery is actually due for a 'make over', and we are keen to use wild-sourced plants from the NSW Seedbank at Mount Annan Botanic Garden, at the same time promoting Mount Annan near one of our most populated Garden Gates. 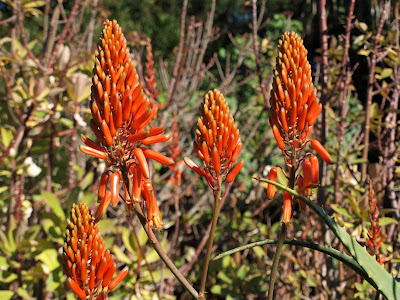 By the way, while I'm plugging RBG on TV, Graham Ross featured our Tropical Centre display of carnivorous plants on Better Homes and Gardens last night. A selection of our animal-loving attractions were at the top of his list of weird and wacky plants.
Email Post
Reactions:

academic essay writing said…
Wow!!! The garden looks so beautiful. I really like these flowers and I have ever seen those flowers anywhere. I really want to visit this beautiful garden.
9:59 pm, November 21, 2017